There is an angel factory in the Karoo…

And from this factory thousands of angels every year fly to other places, other countries, other cultures. This is the story of how it all started.

The story begins with a small craft project in a tiny and remote village in the beautiful Baviaans area of the Karoo semi-desert in South Africa. The name of the village is Vondeling, the craft project takes the name Vondeling Optel Craft, and the year is 2006. More than 10 years later the Karoo Angels tell a story about how small feather and wire angels, 100% made by hand, could dazzle and charm thousands of people all around the world, and put a forgotten village and forgotten people back on the map once again. 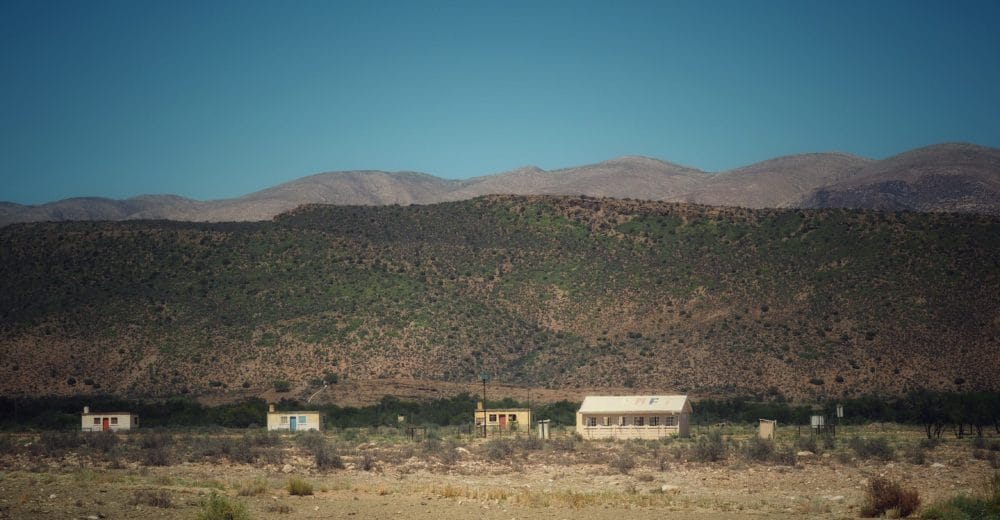 Joined in 2015 by Rietbron Craft, the Angel Factory now have two branches, and under the name of Karoo Angels the two craft groups are embarking on a new and exciting chapter, set out to make the angels known all over the world.

This website is a portal to the angels, the beautiful place where the angels are made, and the community of people involved in creating, exporting and selling the Karoo Angels.

The village of Vondeling consists of scattered homesteads that house 29 families. The village was erected next to a railway station that has long since been closed down. The nearest town is Willowmore, 40 kms away on gravel roads, but with no available public transportation, Vondeling seems an isolated place.

There is no electricity or stores in the village, just a water post, a telephone booth, and a small community hall, that also serves as church venue. And, in 2006 there was also an abandoned tiny church on the outskirts of the village. There is no formal employment for the villagers, besides a couple of people working as hired hands at farms in the area. When the Vondeling Optel Craft project started the village population were dependent on food parcels and government social grants.

And so it was in a marginalized and neglected community that the most beautiful angels saw the light of day. And this has ever since been a guiding principle for all the ups and downs the Karoo Angels adventure has experienced over the years: There is always beauty and hope to be found, but often where you perhaps least expected it.

Vondeling Optel Craft was initiated in 2006, as a community upliftment project, sponsored by Cacadou District Municipality (now Sarah Baartman District Municipality). To facilitate the craft project the donors appointed Craftpartner – a Port Elizabeth based consultancy. Craftpartner consists of Gardi Oousthuizen and Hannelie Herselman, and besides the facilitation of the set-up and initial training, the two-women team were dedicated mentors for many years, and Hannelie is still very much involved, she is in more than one way the Karoo Angels “mother”. After thorough training, including some testing of products, Gardi and Hannelie got the idea of a tiny angel made of meticulously hand-knitted wire, adorned with clear beads and sequins – and a pair of tiny feet peeking out from underneath her dress. The angel Justine was born, and she is still a beloved member of the Karoo Angels’ family.

In 2007 the Cape Craft Design Institute (CCDI) in Cape Town suggested to Kjersti Lie Holtar, from Isandi in Oslo, to have a look at various Christmas decoration products for the Scandinavian market. There were many products to consider, but one caught Kjersti’s interest immediately – a tiny wire knitted angel. So pure, so simple, so different – there was a striking honesty to the product. Kjersti wanted immediately to order this angel, but CCDI patiently explained that this would be very, very difficult – this angel came from such a remote place, and also the group was even not part of CCDI’s jurisdiction – it was merely as a friendly gesture to the group’s mentor, Gardi, that they had agreed to take the angel along. But CCDI offered to contact Gardi, and try to order 100 angels for Isandi. That Christmas, the Vondeling angel became Isandi’s bestseller, actually the 100 first ones sold out in one day.

This first order laid the foundation for a close relationship and collaboration between Vondeling Optel Craft and Isandi. Kjersti had for a long time wondered why no one in the South African craft sector used the locally sourced ostrich feathers for Christmas decorations. Surely there must be a potential, she thought – even if in South Africa ostrich feathers are very much associated with dusters, and seen from a local perspective there is nothing fancy about them. But Kjersti was convinced this would sell well in Norway – if you have seen the Norwegian winter, you will easily understand why the white bleached ostrich feathers look so obvious and grand in a snowy and dim environment. So in 2008 she asked Gardi and Hannelie if Vondeling Optel Craft could make an ostrich feather angel. And indeed they could – and Levona was created.

And the rest is history, as they say…

Vondeling Optel Craft is organized as a cooperative, with 7 members as per 2016. In addition there are part time workers from the community, who contribute with piece work. In one way or another, all the households in Vondeling are involved in the production of the angels, and the activity has indeed contributed to the visible regeneration of the community.

And as for the once abandoned tiny church on the outskirts of the village, this building has since long become the icon of the Angel Factory.

Rietbron is a neighbouring village to Vondeling – although “neighbour” in this case still means more than a two-hours drive on mostly gravel roads. Just on the outskirts of the original “old” and mostly abandoned Rietbron village, there are 600 so-called RDP houses, built under the South African Government’s Reconstruction and Development Programme in the late 1990s. This community has electricity, water, schools, preschools, churches, a police station and a public health station – but is lacking the most important thing: Employment for the inhabitants.

Rietbron Craft was set up as a way to help create job opportunities. Due to the success of Vondeling Optel Craft, Gardi and Hannelie  were approached to work in the Rietbron community, with the aim to develop a similar concept. Since 2009 Rietbron Craft has been full at work, once again with Isandi as an active trading partner.

Like in Vondeling, the Rietbron group is organized as a cooperative, also here 7 members. Initially the group worked with only wire – crocheting, knitting and spray-painting as craft techniques, with a glimmering bead here and there. The Rietbron crafters have developed a uniquely feminine and light expression in their products. One is easily reminded of times long past – Grandma’s old crocheted blanket, great-grandma’s embroidered tablecloth, lacework and filigree, all of this made in thin wire of remarkable quality.

Unfortunately orders did not pour in for the Rietbron crafters, despite their outstanding quality. Perhaps it was the wrong products, perhaps it was too little branding and marketing, perhaps the mentoring period was too short. But the craft group never gave up during those difficult years, and through this they built a remarkable work ethic and spirit as a group. At the same time the demand for the angels by far exceeded the production capacity at Vondeling Optel Craft. So, the obvious solution to this challenge and Rietbron Craft’s need for orders, was to introduce a 2nd branch of the Angel Factory. But – very important – with a clearly defined own range of angels. After all, a lot of identity is built in each angel, they belong to the community in which they were created, and are not an item that just can be produced here, there, and everywhere. This is still how things are kept today – the two branches of Karoo Angels make their own range of angels, with names reflecting their communities.

So in 2015 a new generation of Karoo Angels saw the light of day in Rietbron – the Baby Angels. Also two of the medium feather angels were introduced – Gerda and Anna – with distinct features showing Rietbron Craft’s unique skills: The draped cape of Anna was previously found in a beautiful wire lily, and the wings of Gerda were once made as heart decorations, depicting the amazing Karoo thorn tree.

Rietbron Craft is now an integral part of the Angel Factory, both answering to the increasing demand for Karoo Angels and contributing with their unique skills. And who knows, perhaps there will be another branch of the Angel Factory soon to be found?

Vondeling Optel Craft and Rietbron Craft are the most known crafters from the Baviaans area. But they are certainly not the only ones. There is a lot of craft to be explored in the area, and you should check out the Baviaans Craft website – www.baviaanscrafters.co.za 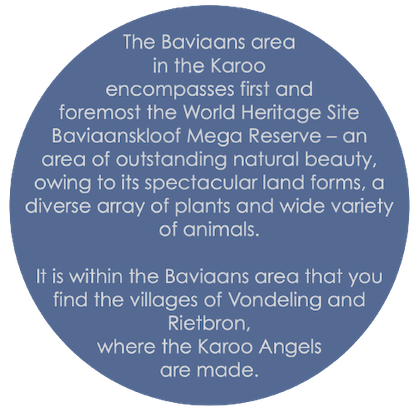 We have come to the end of another week 😇 hope all our Karoo Angel friends had a productive one🙂 because Gugu as you can see had a busy one so she needed her Friday nap in the 🌞. #productive #karooangels #angel #featherangel #gugu #handmade #handcraft #madeinsouthafrica #madeinthekaroo #gifts #christmas2021 #osrichfeathers #knittedwings #ilovechristmas
Today is Ronelle’s turn to be a model and she opted for the blossoms as her splash of color. A little something I read somewhere “the flowers appear on the earth;the time of the singing birds has come, and the voice of the turtle is heard in our land”🌻 wish all our Karoo Angel friends a wonderful weekend🤗#angels #karoo #thekaroo #karooangels #featherangels #gift #christmas2021 #spring2021 #handmade #southafrica #africa #craft #ostrichfeather #wire
Spring is here yet we only get a few sunny days and today Natalia took the chance to take a nap in the sun🌞#spring#sunnyday #bloomingseason #featherangels #angels#goldenfeathers #natania #feathers #wirecraft #ostrichfeathers #september #handmade #karooangels
as we close for a long weekend here in South Africa I am sitting looking at the Mia angel hanging on our display in the office-and the whole scene just gives me good vibes😇.Sometimes it is those small things that bring smiles and good feelings!